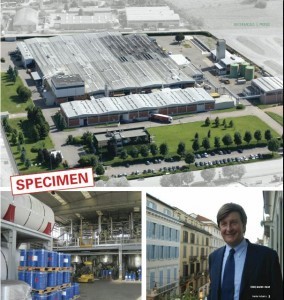 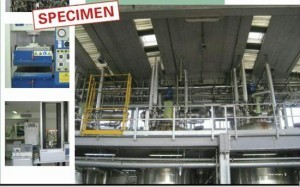 In 2005 Adhesive Based Chemicals (ABC) started its operations under the same roof of Industrie Chimiche Forestali (ICF) giving birth to the Forestali Group. CEO of both companies, Doctor engineer Guido Cami, tells Filomena Nardi how the group has developed into a leading supplier of polyurethane adhesives across the globe.

Represented by the symbol of a green tree which was chosen not only as a historical icon, but also as a way to express a commitment to make the world a better place, the Forestali Group is a leading a worldwide business which is embodied by two different companies. “ICF is mainly dedicated to the production of adhesives for the footwear, leather goods and upholstery industries, whilst ABC makes industrial adhesives for the flexible packaging and the automotive sectors,” explained CEO, Guido Cami. Even if the final products and the ref – erence markets of these two companies are completely different, the two businesses complement each other on many different levels. According to Mr Cami, “The group is a bit like a building divided into many apartments which are managed by the same porter. The synergies between the two companies are many and in my opinion both ICF and ABC are an indissoluble match, whose main strength is represented by them sticking together.”

When One Became Two

The first company of the group, ICF is 94 years old and started its activity as a deforestation business dedicated to timber processing. Over the years the company evolved into a leading Italian supplier of adhesive for the footwear, leather goods and upholstery industries. In 2005 the management decided that it was about time to take a step towards new horizons. “This is when ABC was established,” declared Mr Cami. “ABC was born with the objective to diversify the activities of ICF and at the same time launch the business into the international market.” Today, the Forestali Group, thanks also to ABC, has found a new reference market in the automotive industry which contributes to the majority of the company’s revenue.” Starting from scratch in 2005, ABC has managed to produce a total of 9,000t of adhesives by the end of 2012 of which 7,000t were intended for the automotive market and the remaining 2,000 were sold to the packaging and laminating industries.

ABC and the Automotive Market

ABC currently produces approximately 6,000t of adhesives intended for car roofs. “If we consider that the worldwide need of adhesives for the automotive sector is about 10,000 tons, it is with pride that I can say that our company represents 50 per cent of the world share for the production of adhesives,” declared Mr Cami. There is no doubt that the automotive industry has become a very important source of ABC’s revenue, however the company offers a range of approximately 150 different products destined to different sectors and is hoping to reach new types of markets within the next three to four years. ABC is also determined to continue its trend of rapid growth and is currently investing in new equipment that will allow the company to produce more than 12,000t of adhesives by 2013.

Investment in research and development is essential for developing new products and adopting new technologies – two very important features that usually keep customers very happy. “I would say that one of the keys to our success is the attention and dedication that we have towards our customers,” stated Mr Cami. “Our main goal is to work closely with our clients in order to satisfy their needs. We listen to their requests, we develop and test in house what they need and we ensure a constant technological support to all of our customers.”

Forestali Group’s headquarter is in Marcallo con Casone, a small town not too far from Milan. For many years Italy had been the company’s main market. “Unfortunately, not anymore,” said Mr Cami. “The automotive market has had amajor knock down since the global economic downturn started and this is the reason why our main target now is the world market.” Today the group’s products reach many companies across the globe. “70 per cent of our turnover is made by exports,” continued Mr Cami. “Our adhesives are used in the US, Mexico, Columbia, across the Mediterranean, Africa, Russia, India, Turkey, Japan, China, Bangladesh and many more.” Forestali’s expansion is not stopping just yet and according to the CEO, the group is about to start a new project in Indochina and is considering to be commercially present in Vietnam and in Indonesia.

It Takes Two to Tango

Forestali Group’s internationalization process coincides with Guido Cami being appointed as CEO of both ICF and ABC in 2010. “My arrival within the group symbolises the will to join the two businesses into a single force,” said the CEO. “When I joined the company Forestali was coming from a dark period. The group’s turnover was approximately €40 million, of which €20 million was made in Italy and the other half abroad. At the end of 2012 we have managed to register €64 million of revenue, of which €20 million is still due to sales in Italy and about €44 million is coming from the rest of the world.” This result confirms that not only has the group managed to keep its customers in Italy despite the global crisis, but within only two years has doubled its export revenue. “If we were able to achieve these amazing results it means that the group already had the characteristics to become international and it was only waiting for someone to inspire them to move beyond the Italian borders into new markets,” said Mr Cami. “We would not have achieved this major success without great technical knowhowand the commitment of highly skilled employees.” Challenging the Industry Giants Forestali Group is a much smaller company when compared to chemical giants such as BASF and DOW. “We are in the chemical industry and in competition with international colossal companies. We are a small entity walking in a territory full of giants, but we are not afraid of being trampled on,” smiled Mr Cami. “Even if we are small we have a dedicated research and development department supported by a solid technical background, a speedy production process and the ability to quickly respond to customers’ demand.” For further proof that Forestali Group represents real competition to the giants of the chemical market, the company was awarded, by Databank Cerved Group, the accolade of a ‘Company to Watch’ in October 2012. “We are very proud of this award which represents the icing on the cake after all the hard work,” concluded Mr Cami. “During the past two years we have been moving forward by taking one step at a time and we have succeeded and established ourselves as a serious competitor within our field of activity. I really believe that if we carry on doing what we have being doing, we will go even further.”